Announcing the Winners of the 2013 Thomas Wolfe Fiction Prize

NORTH CAROLINA—Kevin Winchester of Waxhaw has won the 2013 Thomas Wolfe Fiction Prize for his short story, “Waiting on Something to Happen.”

Final judge Ruth Moose called Winchester’s piece “a powerful story, with sparse dialogue, at a critical juncture in the life of a tragic hero. Not a word is wasted, and the emotion skillfully underplayed so that the reader’s mind fills in the backstory. . . . A masterpiece of work.”

Moose, the author of three short-story collections and six collections of poetry, also awarded honorable mentions to Pittsboro’s Ashley Memory for her story “Once in a Blue Moon,” and to Jacob Appel of New York City for “Some Helpful Background for the Incoming Tenant.”

Moose described Memory’s entry as “a story with an academic setting that could have been cliché, but never for a moment stoops to that. Original, skillfully plotted, (with) a character you care about and a surprise ending that actually works.”

Of Appel’s story, Moose said, “I was absolutely in love with the voice of this piece. A snippy, smartmouth know-it-all who delivers a story in flashing prose that held me from the first sentence.”

Winchester will receive a prize of $1,000, and his story, along with the two honorable mentions, will be considered for publication by The Thomas Wolfe Review. 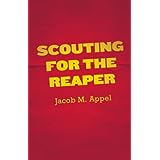 Ashley Memory is a graduate of UNC-Chapel Hill, where she is now a communications director. Her debut novel, Naked and Hungry (2009), was named one of the season’s most promising by Library Journal. Appel has published short stories in more than 200 literary journals and won major competitions, including the 1998 Boston Review Short Fiction Contest. His story “Counting” was short-listed for the O.Henry Award in 2001.

Preliminary judge David Radavich of Charlotte selected six finalists, in addition to the winning story and honorable mentions: two additional stories by Jacob Appel, “Ashton Main’s Wayward Daughter” and “The Synagogue at the Edge of the Earth”; “Hollow Victory” by Devin ‘Nambe’ Bent of Santa Fe, NM; “The Changeling” by Mark Connelly of Milwaukee, WI; “Wind Chimes” by Asheville’s David Brendan Hopes; and “What Daddy Did” by Maxine Rock of Brevard.

“These stories made me know, without one ounce of doubt, that the short story is very much alive and thriving,” Moose said. “Bravo to all.”