Two Elected to NCWN Board of Trustees

Both were elected unanimously. They will be seated at the next Board Meeting, in September.

Stephanie Andrea Allen, Ph.D, is a native Southerner and out Black lesbian writer, scholar, and educator. She founded BLF Press in 2014 while she was still in graduate school, realizing that the challenges that women faced in regards to publishing still existed, (lack of diversity in publishing; the [false] notion that lesbian literature was now “mainstream;” lack of access to agents, editors, and other publishing professionals; and more than anything, the notion that their stories were somehow unworthy or had no literary merit), and decided that she could do something about that.

Stephanie holds a Ph.D in American Studies from Purdue University; an M.A. in English from Auburn University; and a B.A. in English from Columbus State University. Her scholarship examines the marginalization of Black lesbian cultural productions and the intersections of race, class, gender, and sexuality that contribute to the invisibility of Black lesbians in popular and literary culture.

You can learn more about Stephanie at www.stephanieandreaallen.com. 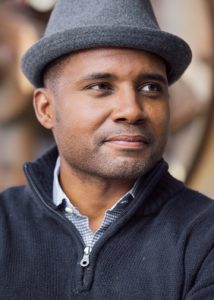 Acclaimed actor and playwright Mike Wiley has spent the last decade fulfilling his mission to bring educational theatre to young audiences and communities across the country. In the early days of his career, Wiley found few theatrical resources to shine a light on key events and figures in African-American history. To bring these stories to life, he started his own production company.

Through his performances, Wiley has introduced countless students and communities to the legacies of Emmett Till, Henry “Box” Brown and more. His recent works include a one-man play based on Tim Tyson’s memoir Blood Done Sign My Name and The Parchman Hour, an ensemble production celebrating the bravery and determination of the Freedom Riders who risked their lives to desegregate Southern interstate bus travel in 1961.

Mike Wiley has a Masters of Fine Arts from the University of North Carolina at Chapel Hill and is the 2010 and 2014 Lehman Brady Visiting Joint Chair Professor in Documentary Studies and American Studies at Duke University and the University of North Carolina at Chapel Hill. In addition to his numerous school and community performances, he has also appeared on Discovery Channel, The Learning Channel, and National Geographic Channel and has been featured in Our State magazine and on PBS’ North Carolina Now and WUNC’s The State of Things.

NCWN trustees are required to be members of the North Carolina Writers' Network. They serve three-year, renewable terms.