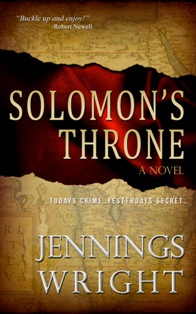 An impenetrable safe is breached and a secret artifact is stolen. Containing information that could change the course of the world, its desperate owner sends Gideon Quinn, his head of security, and Gideon’s wife Rei, an art preservationist, to find it at any cost. What they discover is a clue to the lost throne of King Solomon, the real object of the theft. They are thrust out on an adventure that leads them halfway around the world. Following letters left by a Jesuit in 1681, they must weave through ancient sites along the Portuguese Spice Route, keeping ahead of a secret militant order that is determined to beat them to Solomon’s Throne. Filled with fast paced action and having broad appeal, Solomon’s Throne is an ingenious treasure hunt adventure that sweeps the reader around the globe in a race against time.

Born and raised in Rockledge, Florida, Jennings Wright spent her early years reading anything she could get her hands on, when she wasn't spending time in and on the water. She won a prize in the 6th grade for her writing. Jennings attended the University of Tampa, graduating with a BA in Political Science, and almost enough credits for BAs in both English and History. She spent time over the years doing various kinds of script doctoring, business writing, editing, and teaching writing, but mostly having and raising her family, homeschooling her children, owning and running a business with her husband, and starting a non-profit to Uganda. Thanks to a crazy idea called NaNoWriMo, Jennings got back into creative writing in 2011 and hasn't stopped since. She's written three novels and a screenplay, with more ideas on the drawing board. She currently lives in North Carolina with her husband, a political writer, and two children, and travels extensively.