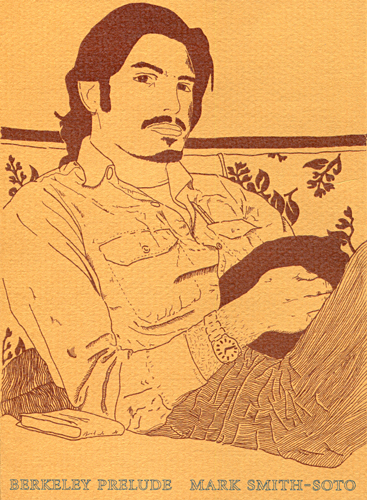 A narrative in eight parts, Berkeley Prelude is the story of two men: Mark Smith-Soto and Mark Smith-Soto. With nimble humor and unﬂinching gaze, an older Smith-Soto traces himself through the relationships and experiences of his younger, yet-unformed self. The backdrop is the fully-matured chaos of 1970s Berkeley, California, where street preachers may work for the FBI, machete-wielding night-stalkers are a fact of life, and a man with no face sees what no one else can. In the end, Berkeley Prelude cautions that when you look back, the face you don’t recognize might be your own.

Mark Smith-Soto is professor of Spanish and editor of International Poetry Review at the University of North Carolina at Greensboro. Born in his father's hometown, Washington, D.C., and reared in his mother's native country, Costa Rica, he contributes new tonalities, by turns ironic, lyrical, or passionate, to the growing chorus of U.S. Latino poetry. His poems have appeared in Antioch Review, Kenyon Review, Literary Review, Louisville Review, Nimrod, Poetry East, Quarterly West, Rosebud, Southern Poetry Review, The Sun, and numerous other magazines. Award a 2005 National Endowment for the Arts fellowship in creative writing, he has published three prize-winning chapbooks and two full-length poetry collections, Our Lives are Rivers (University Press of Florida, 2003), and Any Second Now (Main Street Rag Publishing Co., 2006). His translation of the selected poetry of Costa Rican writer Ana Istarú, Fever Season, was published in 2010 by Unicorn Press.