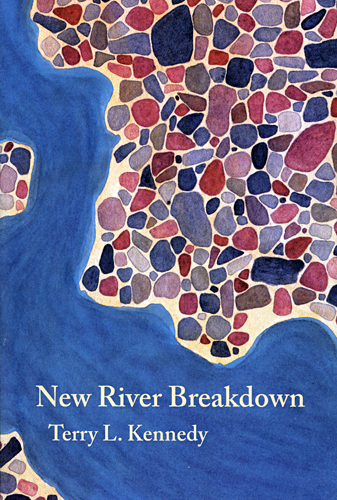 “Not only is Terry Kennedy’s New River Breakdown a stellar volume of prose poems, but it’s also a canny primer on that genre—a many-headed, oft-misunderstood hybrid. His querulous, introspective speaker resists his own breakdown by breaking down his universe into parcels of incremental wonder in which ‘fear and love [are] one and the same.’ The result is poem after poem of fabulous imagery and infinite possibility. We recognize in these tableaux the worlds we inhabit and long for at once—articulated so memorably in ‘What Love Comes To’: ‘One small thing I still love about you is how little of you I actually know . . . ’ Kennedy expertly explores the prose poem’s accommodating elasticity, beautifully marrying the discursive brunt of the best prose and the impressionistic language verse thrives on.”
—Joseph Bathanti, Poet Laureate of North Carolina

“Beautiful and moving, Terry Kennedy’s second poetry collection describes an elusive and haunting narrative of loss, love, and recovery. His prose poems bring us so close to the narrator that we share in our bones his predicament of wanting to go forward while fearing what may be ahead. ‘It’s neither the end nor the beginning of all we hope for,’ he discovers. Lyricism and considered thought are here, and lines that strike sparks from these passionate poems.”
—Kelly Cherry, author of The Life and Death of Poetry

“The bright, swiftly kinetic surfaces of Terry Kennedy’s poems whisper as they pass a wistful but passionate love story. He has an Impressionist’s purpose and deftness of touch. I think of Renoir, of the etudes of Debussy. Yet his strophes stand firmly on their ground and are as strong as the seasons they portray. His every image bears the nuances of a remembrance. New River Breakdown is a rare treasure.”
—Fred Chappell, winner of the Bollingen Prize for Poetry, author of Ancestors and Others

Terry L. Kennedy is the author of the limited edition chapbook Until the Clouds Shatter the Light That Plates Our Lives, selected by Thomas Lux for Jeanne Duval Editions of Atlanta, GA. His work appears in numerous literary journals and magazines including Cave Wall, from the Fishouse, Southern Review, and Waccamaw, and has been honored with a Randall Jarrell Fellowship as well as fellowships to the Virginia Center for the Creative Arts. He currently serves as the Associate Director of Graduate Program in Creative Writing at the University of North Carolina at Greensboro and is Editor of the online journal storySouth.